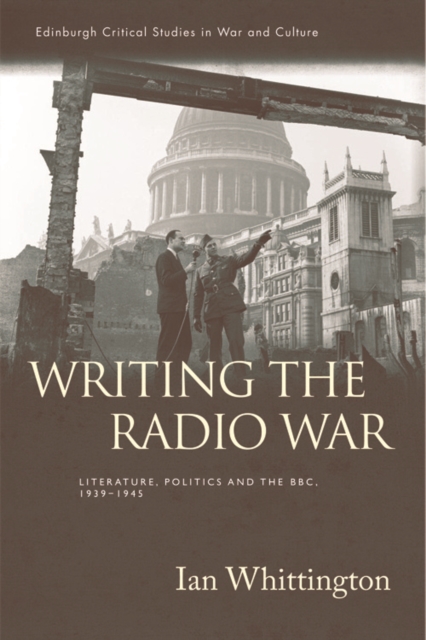 Part of the Edinburgh Critical Studies in War and Culture series

Wartime British writers took to the airwaves to reshape the nation and the Empire'Writing the Radio War' positions the Second World War as a critical moment in the history of cultural mediation in Britain.

Through chapters focusing on the middlebrow radicalism of J.B.

Priestley, ground-breaking works by Louis MacNeice and James Hanley at the BBC Features Department, frontline reporting by Denis Johnston, and the emergence of a West Indian literary identity in the broadcasts of Una Marson, 'Writing the Radio War' explores how these writers capitalised on the particularities of the sonic medium to communicate their visions of wartime and postwar Britain and its empire.

By combining literary aesthetics with the acoustics of space, accent, and dialect, writers created aural communities that at times converged, and at times contended, with official wartime versions of Britain and Britishness.Key FeaturesMerges the fields of sound studies, radio studies, and Second World War literary studies through considerations of both major and marginalized figures of wartime broadcastingBrings substantial but underused archival material (from the BBC Written Archives Centre, the Harry Ransom Humanities Research Center, the British Library, and other archives) to bear on the cultural importance of radio during the warForegrounds the role of radio in bridging literary movements from the highbrow to the middlebrow, and from the regional to the imperialDraws on Listener Research Reports, listener correspondence, newspaper coverage, and surveys by Mass Observation and the Wartime Social Survey in order to capture listeners' responses to wartime broadcasting in general as well as specific programsFills a gap in accounts of literary radio broadcasting, between Todd Avery's Radio Modernism (which ends at 1939) and postwar accounts of the Third Programme (by Humphrey Carpenter and Kate Whitehead) and individual writer-broadcasters