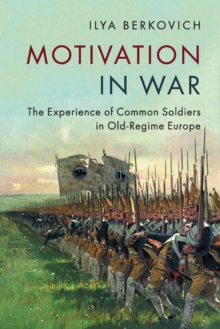 Motivation in War : The Experience of Common Soldiers in Old-Regime Europe Paperback / softback

This book fundamentally revises our notion of why soldiers of the eighteenth century enlisted, served and fought.

In contrast to traditional views of the brutal conditions supposedly prevailing in old-regime armies, Ilya Berkovich reveals that soldiers did not regard military discipline as illegitimate or unnecessarily cruel, nor did they perceive themselves as submissive military automatons.

Instead he shows how these men embraced a unique corporate identity based on military professionalism, forceful masculinity and hostility toward civilians.

These values fostered the notion of individual and collective soldierly honour which helped to create the bonding effect which contributed toward greater combat cohesion.

Utilising research on military psychology and combat theory, and employing the letters, diaries and memoirs of around 250 private soldiers and non-commissioned officers from over a dozen different European armies, Motivation in War transforms our understanding of life of the common soldier in early modern Europe.