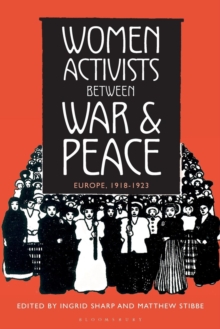 Women Activists between War and Peace employs a comparative approach in exploring women's political and social activism across the European continent in the years that followed the First World War.

It brings together leading scholars in the field to discuss the contribution of women's movements in, and individual female activists from, Austria, Bulgaria, Finland, France, Germany, Great Britain, Hungary, Russia and the United States. The book contains an introduction that helpfully outlines key concepts and broader, European-wide issues and concerns, such as peace, democracy and the role of the national and international in constructing the new, post-war political order.

It then proceeds to examine the nature of women's activism through the prism of five pivotal topics: * Suffrage and nationalism* Pacifism and internationalism * Revolution and socialism * Journalism and print media * War and the body A timeline and illustrations are also included in the book, along with a useful guide to further reading.

This is a vitally important text for all students of women's history, twentieth-century Europe and the legacy of the First World War.