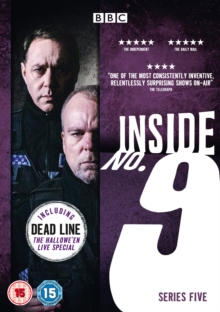 Inside No. 9: Series Five DVD

The complete fifth series of the BBC comedy anthology written by and starring 'League of Gentlemen' creators Reece Shearsmith and Steve Pemberton.

Each episode is a stand-alone comedy set behind the doors of a different house number nine on a British street.

The various characters explored include a referee taking charge of his last game before retirement, a couple buying their first property, a secretive magician and a pair of police officers on a night shift.

The episodes are: 'The Referee's a ...', 'Death Be Not Proud', 'Love's Great Adventure', 'Misdirection', 'Thinking Out Loud' and 'The Stakeout'.