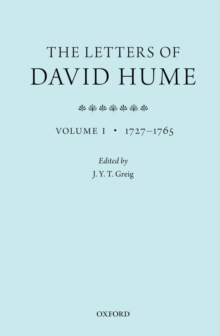 J. Y. T. Greig's two-volume edition, first published in 1932, presents the correspondence of one of the great men of the 18th century.

The edition offers a rich picture of the man and his age, and is a uniquely valuable resource to anyone with an interest inearly modern thought.