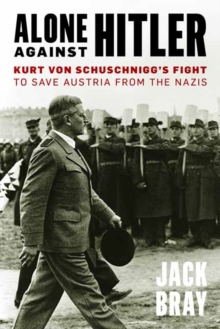 Alone against Hitler : Kurt von Schuschnigg's Fight to Save Austria from the Nazis Hardback

As one of the first leaders to defy Adolf Hitler during the build-up to WWII, his is a story of lasting importance.

Though young and untested upon entering office, von Schuschnigg courageously rejected the rising tide of Austrian Nazism, insisting on equal rights and respect for the Jewish minority. Author Jack Bray surveys the geopolitical conditions in Austria during the march to war, highlighting Von Schuschnigg's valiant four-year struggle to prevent his nearly defenseless small nation from being taken over from within by unrelenting, violent Austrian Nazis.

Schuschnigg's encounters with Hitler and other central characters of 1930s Germany (Himmler, Hess, Ribbentrop, Hindenburg, Goring and Papen, as well as their ally, Mussolini) are told in scenes of high-drama and vivid detail. For his daring defiance, von Schuschnigg paid a dear price-seven years in a concentration camp and abuse to the point of breakdown.

In one of Hitler's final acts from the bunker where he would ultimately take his own life, a trembling Fuhrer ordered von Schuschnigg to be killed.

Soldiers burst through the walls at the camp where von Schuschnigg was imprisoned, but they turned out to be from the U.S.

Fifth Army, liberating him to freedom. Although Kurt von Schuschnigg's name may be unfamiliar now, he was for a brief moment at the center of world history, even gracing the cover of Time magazine in 1938.

Alone Against Hitler profiles an oft-forgotten but crucially important figure in WWII history, celebrating the legacy of a man who bravely fought against the highest forms of evil.