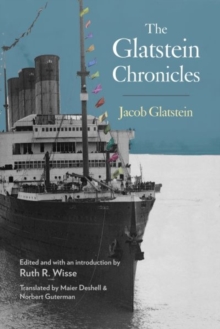 This seminal American work from the Yiddish literary canon, in a restored English edition, offers the luminous narrative of the author's journey home to his Polish birthplace In 1934, with World War II on the horizon, writer Jacob Glatstein (1896-1971) traveled from his home in America to his native Poland to visit his dying mother.

One of the foremost Yiddish poets of the day, he used his journey as the basis for two highly autobiographical novellas (translated as The Glatstein Chronicles) in which he intertwines childhood memories with observations of growing anti-Semitism in Europe. Glatstein's accounts "stretch like a tightrope across a chasm," writes preeminent Yiddish scholar Ruth Wisse in the Introduction.

In Book One, "Homeward Bound," the narrator, Yash, recounts his voyage to his birthplace in Poland and the array of international travelers he meets along the way.

Book Two, "Homecoming at Twilight," resumes after his mother's funeral and ends with Yash's impending return to the United States, a Jew with an American passport who recognizes the ominous history he is traversing. The Glatstein Chronicles is at once insightful reportage of the year after Hitler came to power, reflection by a leading intellectual on contemporary culture and events, and the closest thing we have to a memoir by the boy from Lublin, Poland, who became one of the finest poets of the twentieth century.