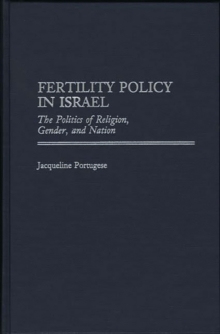 Fertility Policy in Israel : The Politics of Religion, Gender, and Nation Hardback

An examination, with feminist perspective, of Israel's fertility practices and policies surrounding abortion, family planning, in vitro fertilization and the welfare state.

This book exposes the complex web of issues, actors, and power relations that shape the Israeli political agenda.

At the same time, it contributes to ongoing feminist debates concerning the politics of reproduction and the role of the state in contributing to the oppression of women. Israel's commmitment to Zionist ideals and policies, its ambiguous relationship with Jewish Orthodoxy, and the intersection of the two at the level of gender relations have played a great role in determining the shape, scope,and direction of many government policies.

This book explores the relationship between these three ideological and institutional forces in the context of development of fertility policy.

In the process, it touches upon various points of interest, including the state's treatment of the Palestinian Arab minority and its relationship with the wider Palestinian national movement; the power relations and political agenda underlying policy-making in Israel; the development of Israeli social and political identity; and the use of gender to explain both the status of Israeli women and the overall unfolding of politics and policy-making. 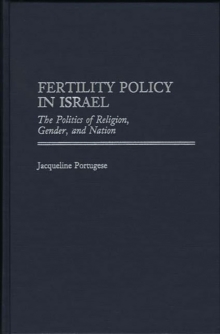