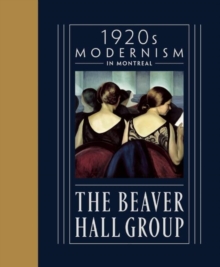 Using the group as a starting point, the book launches into investigations into such wide-reaching topics as the metropolis and modernity, juxtapositions between economic progress and cultural development as social equality, and the role of gender in approaches to artists and their work.

Divided into three sections, The Beaver Hall Group: 1920s Modernism in Montreal comprises of several contextual essays, beginning with the history of Beaver Hall Hill and the influence of its location in the city of Montreal.

The reader is then taken through the progress of the Beaver Hall Group and the central part they played within modernity in Canada.

Through an examination of documented exhibitions, press coverage, photographs and key works from the period, the book gives a fascinating insight into the reach of the group by concentrating on 30 established artists including Mabel May, Barbara Meadowcroft, Emily Coonan and Kathleen Morris.

This unique expose of the group is explored against the backdrop of Montreal's cultural scene in the 1920s, and how the collective crossed artistic disciplines, placing the group within a broader context of the arts.The Beaver Hall Group: 1920s Modernism in Montreal is co-published with Montreal Museum of Fine Art, coinciding with a major exhibition at the museum. In partnership with Montreal Museum of Fine Art.