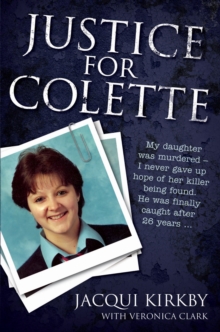 Justice for Colette : My Daughter Was Murdered - I Never Gave Up Hope of Her Killer Being Found. He Was Finally Caught After 26 Years. Paperback / softback

On 30th October 1983, 16-year-old Colette Aram left the family home to walk to her boyfriend's house.

She never arrived. Her mother, Jacqui Kirkby, knew instinctively that something was very wrong and , the following morning, Colette's lifeless body was found dumped by a hedgerow, Jacqui's life would never be the same again. The investigation into the murder of Colette was to be one of the biggest manhunts ever launched by the police and, agonisingly for her loved ones, one which was to last more than a quarter of a century.

The murder of Colette was even the first case ever to appear on the BBC's Crimewatch show - it generated many leads but no conviction was forthcoming. Having evaded capture for so many years, Colette's killer was everntually caught thanks to a relatively new technique of DNA profiling - the chance arrest of his son for a minor motoring offence led cold-case detectives directly to Paul Hutchinson's door.

Finally, the killer was cornered.