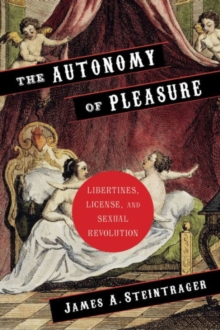 The Autonomy of Pleasure : Libertines, License, and Sexual Revolution Hardback

What would happen if pleasure were made the organizing principle for social relations and sexual pleasure ruled over all?

Radical French libertines experimented clandestinely with this idea during the Enlightenment.

In explicit novels, dialogues, poems, and engravings, they wrenched pleasure free from religion and morality, from politics, aesthetics, anatomy, and finally reason itself, and imagined how such a world would be desirable, legitimate, rapturous-and potentially horrific. Laying out the logic and willful illogic of radical libertinage, this book ties the Enlightenment engagement with sexual license to the expansion of print, empiricism, the revival of skepticism, the fashionable arts and lifestyles of the Ancien Regime, and the rise and decline of absolutism.

It examines the consequences of imagining sexual pleasure as sovereign power and a law unto itself across a range of topics, including sodomy, the science of sexual difference, political philosophy, aesthetics, and race.

It also analyzes the roots of radical claims for pleasure in earlier licentious satire and their echoes in appeals for sexual liberation in the 1960s and beyond.