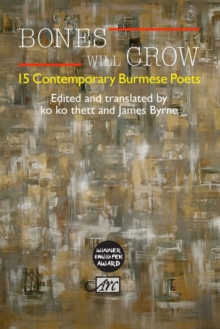 Bones Will Crow : An Anthology of Burmese Poetry Paperback / softback

Part of the Arc Anthologies series

The poems include global references from a culture in which foreign books and the internet are regarded with suspicion and where censorship is an industry.

The poets have been ingenious in their use of metaphor to escape surveillance and censorship, writing poet-modern, avant-garde, performance and online poetries.

The anthology reveals the transition of traditional to modernist poetry, the development of Burmese poetry over the second half of the 20th century, as Burma has changed.

Through their wildly diverse styles, these poems delight in the freedom to experiment with poetic tradition.