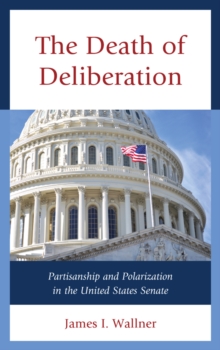 The Death of Deliberation : Partisanship and Polarization in the United States Senate Paperback / softback

by James I. Wallner

A common observation of the Senate today is that it is paralyzed by gridlock; the Senate is currently composed of ideologically polarized members, and the majority and minority leaders exercise more influence because they lead more cohesive political parties.

However, the argument that the Senate and by extension, the Congress, are undermined by rampant obstruction overlooks the fact that the contemporary Senate is still capable of overcoming the differences among its members without descending into an endless debate of ideological partisanship and irreconcilable gridlock.

While current treatments of the Senate often seek to explain why gridlock happens, in this book, James Wallner addresses the important question of why gridlock does not happen.

His answer is quite simple: The Senate changes the manner in which it makes decisions on a case-by-case basis in order to limit conflict between its members.

Yet, the Senate's ability to produce important legislation in the current environment may undermine the institution's deliberative function.

Wallner puts forth the unique proposition that while the contemporary Senate may indeed be broken, it is not broken in the sense typically acknowledged.