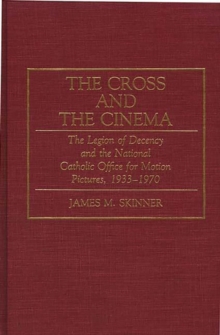 The Cross and the Cinema : The Legion of Decency and the National Catholic Office for Motion Pictures, 1933-1970 Hardback

Skinner reveals how the Roman Catholic Church, through its agency, the National Legion of Decency, dominated the American film censorship scene in tandem with the Production Code Administration.

In its heyday in the 1930s and 40s, the Legion claimed a membership of over eleven million Americans--about one moviegoer in twelve--and brought movie moguls such as David O.

Selznick and Howard Hughes to their knees in determined campaigns to bar what it deemed unsuitable entertainment.

Some of the most controversial titles in the annals of movie censorship, including The Outlaw, Duel in the Sun, Who's Afraid of Virginia Woolf?, and The Pawnbroker, are featured as targets of clerical wrath in this study which covers four decades of film history.