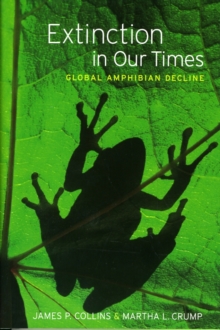 For over 350 million years, thousands of species of amphibians have lived on earth, but since the 1990s they have been disappearing at an alarming rate, in many cases quite suddenly and mysteriously.

What is causing these extinctions? What role do human actions play in them? What do they tell us about the overall state of biodiversity on the planet?

In Extinction in Our Times, James Collins and Martha Crump explore these pressing questions and many others asthey document the first modern extinction event across an entire vertebrate class, using global examples that range from the Sierra Nevada of California to the rainforests of Costa Rica and the Mediterranean coast of North Africa.

Joining scientific rigor and vivid storytelling, this book is the first to useamphibian decline as a lens through which to see more clearly the larger story of climate change, conservation of biodiversity, and a host of profoundly important ecological, evolutionary, ethical, philosophical, and sociological issues.