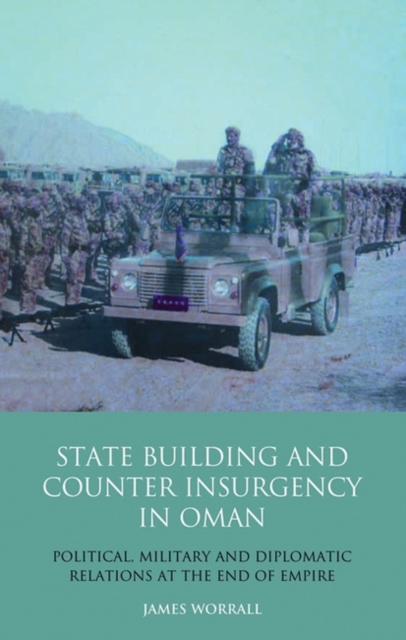 Statebuilding and Counterinsurgency in Oman : Political, Military and Diplomatic Relations at the End of Empire Hardback

In the depths of the Cold War and in the wake of Britain's announcement of its intention to withdraw 'East of Suez' by the end of 1971, Britain was faced with the stark reality of a Marxist rebellion in the Dhofar province of Oman.

This rebellion, whose explicit aim was to 'liberate' the oil-rich Gulf region, confronted the British with the challenge of securing a political order in Oman conducive to protecting Britain's remaining interests in the midst of its military withdrawal from the region. 'State Building and Counter Insurgency in Oman' offers a nuanced picture of Britain's response to the challenges posed by this withdrawal, through an examination the complex Anglo-Omani relationship at this vital juncture in Middle East and Imperial History.

James Worrall offers an examination of how officials in London and the Gulf defined British interests in Oman, and the debates that raged throughout Whitehall, under the successive governments led by Wilson and Heath, about how to best tackle the growing insurgency in Oman.The means by which this challenge was to be met (including the extent of both overt and covert support for the Sultan) in the post-Suez era, posed a number of challenges for decision-makers in Whitehall. The military, economic and diplomatic assistance given to the Omani government to re-establish Sultanate control and crush the rebellion in Dhofar is thus analysed within the context of a complex balancing act, as British politicians and officials tried to reconcile their attempts to create effective and centralised Omani administration and security bodies whilst maintaining the image of strategic withdrawal and the sovereign independence of Oman.

Drawing extensively from newly released archival records and interviews with former officials and high-ranking officers, this book provides a systematic re-examination of the Anglo-Omani relationship during the critical years of Oman's transformation into a modern state.

It will therefore provide vital information and analysis for students and researchers of Middle East History and Politics, the decline and end of empire and the policymaking processes at the heart of an imperial and military withdrawal.