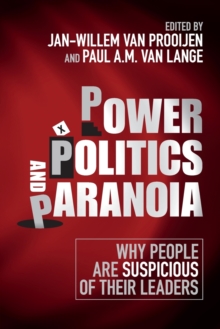 Power, Politics, and Paranoia : Why People are Suspicious of their Leaders Paperback / softback

Powerful societal leaders - such as politicians and Chief Executives - are frequently met with substantial distrust by the public.

But why are people so suspicious of their leaders? One possibility is that 'power corrupts', and therefore people are right in their reservations.

Indeed, there are numerous examples of unethical leadership, even at the highest level, as the Watergate and Enron scandals clearly illustrate.

Another possibility is that people are unjustifiably paranoid, as underscored by some of the rather far-fetched conspiracy theories that are endorsed by a surprisingly large portion of citizens.

How do people generally think and feel about politicians?

How do paranoia and conspiracy beliefs about societal power holders originate?

In this book, prominent scholars address these intriguing questions and illuminate the many facets of the relations between power, politics and paranoia.