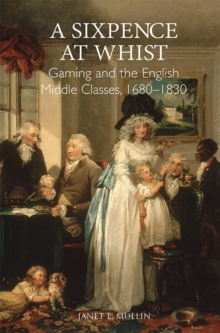 A Sixpence at Whist: Gaming and the English Middle Classes, 1680-1830 Hardback

Enlightenment thinking - the drive for order, organisation and rationality - was an underlying motive force in England's eighteenth century, influencing middle class thinking with regard to the running and improvement of business.

In the same way, it shaped their choice of leisure activities.

As many turned their backs on blood sports, they found that music, conversation and cards embodied rational enjoyment and exercise of human intellect and ability. For the middle classes, card play made use of skills they had in hand and could be justified on the basis of teaching the young their numbers and the importance of accounting for money lost and won.

The careful score-keeping, the accounting for sums won and lost, and the order and discipline of these players' favourite card games echoed and suited their tidy lives.

As important participants in polite society on the strength of their new wealth and their increasing social prominence, the middle classes embraced the agreeable pastimes of gentility while rejecting its dangerous extremes.

Card play became a means of forming and reinforcing social and commercial bonds within complex webs of family and business circles.

As they tugged the fashionable activity of gaming onto their own playing-field from the high-risk arena of the aristocracy, the middle classes were imposing order on disorder, subjecting a reckless activity to new restraints.

Drawing on the personal papers of the commercial and professional classes of eighteenth-century England, A Sixpence at Whist tells the stories of these men and women at play. JANET E. MULLIN is Lecturer in History at St. Thomas University and the University of New Brunswick, both in Fredericton, N.B., Canada.