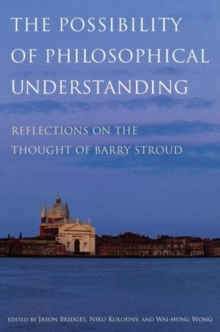 The Possibility of Philosophical Understanding : Reflections on the Thought of Barry Stroud Hardback

Barry Stroud's work has had a profound impact on a very wide array of philosophical topics, including epistemological skepticism, the nature of logical necessity, the interpretation of Hume, the interpretation of Wittgenstein, the possibility of transcendental arguments, and the metaphysical status of color and value. And yet there has heretofore been no book-length treatment of his work. The current collection aims to redress this gap, with 13 essays on Stroud'swork by a diverse group of contributors including some of his most distinguished interlocutors and promising recent students. All but one essay is new to this volume. The essays cover a range of topics, with a particular focus on Stroud's treatments of skepticism and subjectivism. There are also chapters on Stroud's views on meaning and rule-following, on Hume on personal identity, and on the role of desires in the explanation of action. Despite the diversity, the essays are unified by the thematic unity in Stroud's own writings. Stroud approaches every philosophical problem by attempting to get as clear as possible on the nature and source of thatproblem. He aims to determine what kind of understanding philosophical questions are after, and what the prospects for achieving that understanding might be. This theme-of the nature and possibility of philosophical understanding-is introduced in the opening essay of this volume and recurs in differentways throughout the remaining chapters. In recent years, there has been a renewed interest in the philosophy of philosophy. As these essays show, one important source of insight on this subject is the thought of Barry Stroud, for whom pursuit of the philosophy of philosophy has always been indistinguishable from pursuit of philosophy as such.