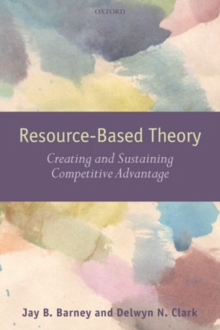 by Jay B. (Professor of Management and Human Resources, and Chase Chair for Excellence in Corpo Barney, Delwyn N. (Associate Professor, and Executive Director of Research, Waikato Management School Clark

The 'Resource-Based View of the Firm' has emerged over the last fifteen years as one of the dominant perspectives used in strategic management.

It addresses the fundamental research question of strategic management: Why it is that some firms persistently outperform others?Resource-Based Theory provides a considered overview of this theory, including the latest developments, from one of the key thinkers in its development.

In broad terms it offers an alternative to Michael Porter's approach, focusing more on the competences and capabilities of the firm, rather than its positioning in its chosen markets. Jay B. Barney has long been recognised as one of the leading contributor to the resource-based theory literature.

In this book he has collaborated with Delwyn N. Clark to produce the first book to examine the theory in a holistic and in-depth manner.

The authors explore not only the applications of the theory in research, teaching, and practice, but also its early roots in traditional economic theory, development and proliferation in the 1990s, and later influence on managementthinking.