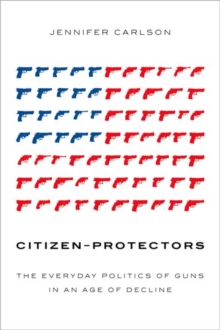 Citizen-Protectors : The Everyday Politics of Guns in an Age of Decline Paperback / softback

From gang- and drug-related shootings to mass shootings in schools, shopping centers, and movie theatres, reports of gun crimes fill the headlines of newspapers and nightly news programs.

At the same time, a different kind of headline has captured public attention: a steady surge in pro-gun sentiment among Americans.

A Gallup poll conducted just a month after the Newtown school shootings found that 74% of Americans oppose a ban on hand-guns, and at least 11 millionpeople now have licenses to carry concealed weapons as part of their everyday lives.

Why do so many Americans not only own guns but also carry them?In Citizen-Protectors, Jennifer Carlson offers a compelling portrait of gun carriers, shedding light on Americans' complex relationship with guns.

Through these experiences she explores the role guns play in the lives of Americans who carry them and shows how, against a backdrop of economic insecurity and socialinstability, gun carrying becomes a means of being a good citizen, an idea that not only pervades the NRA's public literature and statements, but its training courses as well.

A much-needed counterpoint to the rhetorical battles over gun control, Citizen-Protectors is a captivating and revealing look at gun culture in America, and is a must-read for anyone with a stake in this heated debate.