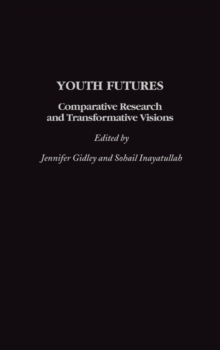 How do young people see the future? Are they optimistic or pessimistic? Do their views vary from culture to culture? Are young people actively engaged in creating their desired futures or are they passively receiving the future?

What effect has globalization on youth culture? How is the future taught in schools? These and many other questions are dealt with in this volume of comparative empirical research from around the world on how youth see the future. Generally, youth are considered immature, irresponsible toward the future, cliquish, impressionistic, and dangerous toward self and others.

They are considered as a mass market-two billion strong-the passive recipients of globalization.

Most recently in OECD nations, youth have become fodder for political speeches-they are the problem that reflects both the failure of the welfare state (dependence on the state), the failure of globalization (unemployment), and postmodernism (loss of meaning and the crisis of the spirit).

In the Third World, youth are seen not only as the problem, but equally as the force that can topple a regime (as in Yugoslavia).

However, youth can also be seen as carriers of a new worldview, a new ideology. These and other views concerning youth are examined in this volume of comparative empirical research.

Studies from around the world provide intriguing answers to questions about how youth see the future and their future roles.

This book will be of particular interest to scholars, students, researchers, and policymakers involved with youth issues and future studies.