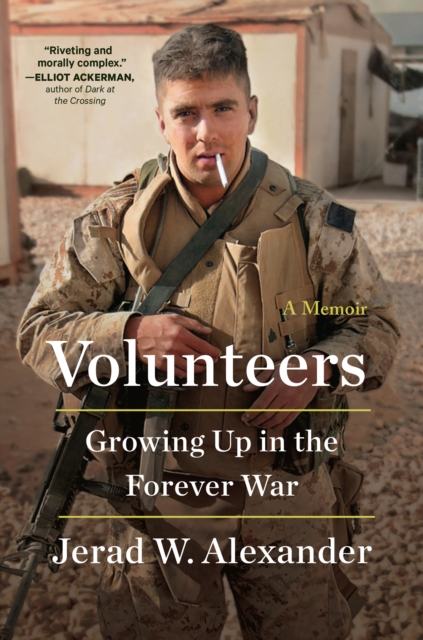 Volunteers : Growing Up in the Forever War Hardback

A BOYHOOD WHERE THE MILITARY IS THE ONLY WAY OF LIFE In this passionate and provocative memoir, Jerad W.

Alexander takes readers deep into the "kingdom"-the insular realm of military families growing up on bases around the world-and vividly evokes a childhood infused with all things war.

As a young boy on an Air Force base in Utah, he lies in bed listening to the fighter jets take off outside his window, and captures the sense of duty and also the loss his family felt when his stepfather deploys to Iraq.

As a teen on a base in Japan, he wears the uniform and plays glorified war games and falls deep down the rabbit hole of Vietnam war literature. And always, always, there are the guns-toy and real-the movies, and the books, all part of a distinctly American sort of heroism and patriotism that Alexander fantasizes someday making his own. The minute he is old enough, he enlists, like his parents and stepfather and grandparents before him, and he, too, lands in Iraq as an eager Marine, desperate to see some action.

Soon, though, he comes to realize he is fighting a lost cause, a skirmish in the ongoing war on terror that is really about a fruitless display of American might.

Everything Alexander has based his life on, has obsessed over, he realizes, is a mirage. With Volunteers, Jerad W. Alexander joins the canon of great war writers, helping readers understand the self-replicating violence and mythologies of American patriotism, offering a view of a war most of us only know about through accounts of elite officers or Navy Seals, not that of the lower enlisted men and women.