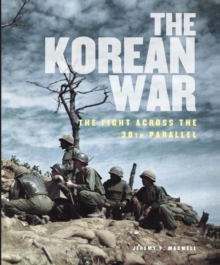 The Korean War : The Fight Across the 38th Parallel Hardback

Part of the Illustrated History series

'The Armed Forces Security Agency responsible for ranking current threats listed Korea fifth as an area of potential danger, behind Indochina and other countries.' So admitted US military analysts the day North Korean communist forces crossed the partition line and invaded South Korea.

However, the fall of the capital did not spell the end of the anti-communist government of Syngman Rhee, and by early July a US-led United Nations (UN) force was in place, fighting a rearguard action as NKPA forces pushed south.

With UN forces trapped inside the tiny Pusan Perimeter, in mid-September the US was able to land 40,000 troops 300 kilometres to the northwest at Inchon, outflanking the North Korean advance and gaining the initiative.What followed over the next three years was the first major conflict of the Cold War era - a war that devastated the country, killed millions and displaced millions more.

The fighting involved combatants from dozens of nations, with more than 20 countries sending soldiers as part of the multinational UN force.

In communist North Korea, more than a million Chinese regulars fought as part of the People's Volunteer Army (PVA), while the Soviet Union supplied pilots and military hardware for the communist cause.Illustrated with 150 archival photographs, maps and illustrations, The Korean War tells the story of the three-year war from the conditions that led to the conflict to the armistice and the establishment of the demilitarized zone (DMZ) along the 38th parallel, leading to the development of the two distinct Koreas we see today.