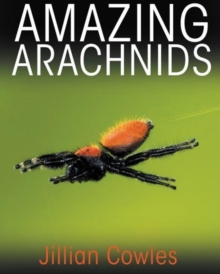 A richly illustrated and up-close look at the secret lives of spiders and other arachnidsThe American Southwest is home to an extraordinary diversity of arachnids, from spitting spiders that squirt silk over their prey to scorpions that court one another with kissing and dancing.

Amazing Arachnids presents these enigmatic creatures as you have never seen them before.

Featuring a wealth of color photos of more than 300 different kinds of arachnids from eleven taxonomic orders--both rare and common species-this stunningly illustrated book reveals the secret lives of arachnids in breathtaking detail, including never-before-seen images of their underground behavior. Amazing Arachnids covers all aspects of arachnid biology, such as anatomy, sociality, mimicry, camouflage, and venoms.

You will meet bolas spiders that lure their victims with fake moth pheromones, fishing spiders that woo their mates with silk-wrapped gifts, chivalrous cellar spiders, tiny mites, and massive tarantulas, as well as many others.

Along the way, you will learn why arachnids are living fossils in some respects and nimble opportunists in others, and how natural selection has perfected their sensory structures, defense mechanisms, reproductive strategies, and hunting methods. Covers more than 300 different kinds of arachnids, including ones new to scienceFeatures more than 750 stunning color photosDescribes every aspect of arachnid biology, from physiology to biogeographyIllustrates courtship and mating, birth, maternal care, hunting, and defenseIncludes first-ever photos of the underground lives of schizomids and vinegaroonsProvides the first organized guide to macroscopic mites, including photos of living mites for easy reference