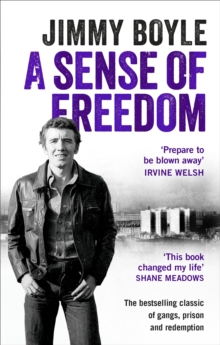 A Sense of Freedom Paperback / softback

Foreword by Irvine Welsh 'My life sentence had actually started the day I left my mother's womb...'Jimmy Boyle grew up in Glasgow's Gorbals.

All around him the world was drinking, fighting and thieving.

To survive, he too had to fight and steal... Kids' gangs led to trouble with the police. Approved schools led to Borstal, and Jimmy was on his way to a career in crime.

By his twenties he was a hardened villain, sleeping with prostitutes, running shebeens and money-lending rackets.

Then they nailed him for murder. The sentence was life - the brutal, degrading eternity of a broken spirit in the prisons of Peterhead and Inverness.

Thankfully, Jimmy was able to turn his life around inside the prison walls and eventually released on parole.

A Sense of Freedom is a searing indictment of a society that uses prison bars and brutality to destroy a man's humanity and at the same time an outstanding testament to one man's ability to survive, to find a new life, a new creativity, and a new alternative.