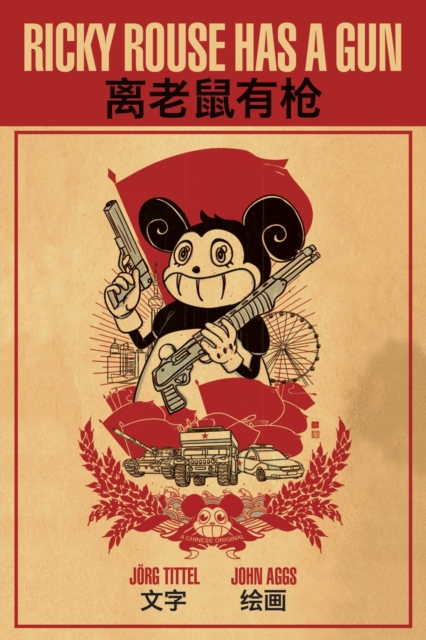 Rick Rouse is a US Army deserter who, after running away to China, gets a job at Fengxian Amusement Park, a family destination heavily "inspired" by Western culture, featuring Rambi (the deer with a red headband), Ratman (the caped crusader with a rat's tail), Bumbo (small ears, big behind) and other original characters.

The park's general manager is convinced that Rick was destined to greet Fengxian customers, dressed as none other than Ricky Rouse.

But when American terrorists take the entire park hostage, only Ricky Rouse can save the day.

In a furry costume. This original graphic novel is a relentless action comedy, a satire of US-China relations, a parody of Western entertainment and a curious look at China, a country that, once we look past its often outrageous infringements, is a culture ripe with innovation and a unique, courageous spirit.

It is introduced by Christopher Sprigman, Professor of Law at New York University and author of The Knockoff Economy. "Tittel and Aggs flip our cheeriest, most-beloved icons on their heads to create a story as thrilling as it is bizarre.

In their world, an amusement park is a thing of gloom, friendly cartoon characters are out for blood and the copycat "Ricky Rouse" is a hero to root for.

Their story of knockoffs behaving badly is a true original itself." Bianca Bosker, The Huffington Post.