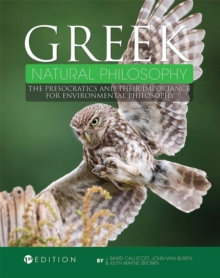 Greek Natural Philosophy : The Presocratics and Their Importance for Environmental Philosophy Paperback / softback

Greek Natural Philosophy presents the primary sources on the Presocratics in a straightforward way in order to tell a coherent story about the astonishing development of natural philosophy in ancient Greece and its relevance today. The book begins with historical influences on the birth of natural philosophy, especially literacy and the ecosystem services provided by the natural environment of ancient Greece.

It argues that the individual philosophers' thoughts about the nature of the cosmos, living things, humankind, and human culture were linked by a "diachronic dialectic of ideas." Each philosopher's speculations were subjected to a critique by the next generation who crafted more subtle theories. The dialectical transition is traced from the mythopoeic worldview of Hesiod to the rational worldview of Thales and his Milesian successors, followed by Xenophanes and Heraclitus, then Parmenides and his Eleatic successors, and the qualitative pluralisms of Anaxagoras and Empedocles.

An entirely fresh interpretation is provided of the Atomists and later Pythagoreans, whose work culminated in the ideas upon which Galileo, Newton, and the other architects of modern science, continued to build.

In the span of only two centuries, the Presocratics developed the basic principles of philosophy and natural science, ecology, mathematical astronomy, the atomic theory of matter, an inertial theory of motion, and the possibility that our solar system is only one of infinitely many scattered throughout infinite time and space. The concluding chapter traces natural philosophy through subsequent centuries until its abandonment in 20th century philosophy, leading to the moribund state of philosophy by the end of that century.