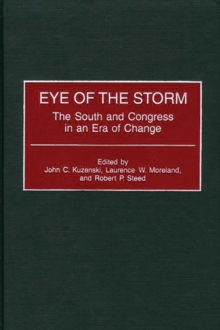 Eye of the Storm : The South and Congress in an Era of Change Hardback

Southern power and influence in Congress has been on the wane in the latter part of the 20th Century, but as the essayists in this collection suggest, the region appears posed to reclaim its influence.

While southern legislative politics is still a product of the region's unique history, political experience, racial legacy, and experience with one-partyism, Congress is one of the primary--if not the paramount--battlegrounds where southern politics are making an impact on the rest of the United States. This collection of the most recent, critical, and thought- provoking literature, written by some of the leading scholars in southern and legislative politics across the country establishes a paradigm of thinking about southern politics vis-a-vis Congress which illustrates the major issues and impacts this connection is likely to have in future decades.

For all scholars and researchers involved with contemporary southern politics, Congressional politics, and U.S. elections.