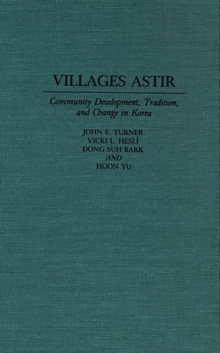 Authors Turner, Hesli, Bark, and Yu focus on the changing patterns of attitudes and behavior of the rural people at two points of time covering the period when a government-sponsored program of community development (the Saemaul Undong) was a viable institution.

The Saemaul program was designed to encourage people in their communities to increase their productivity and thereby improve their living standards.

The study assesses the impact of the program in villages where the communal ties of Confucianism are still noticeable, in contrast with more loosely-knit settlements where the forces of individualism are stronger.

As a point of comparison, the authors also examine differences between the villagers and rural migrants living in two districts of Seoul. An introductory chapter presents the major political developments and cultural features in Korea from the Yi dynasty through the Roh regime.

In setting the stage for the interpretation of survey interview data, the authors present election statistics and economic indicators for each of the villages under consideration.

They examine the influence of monetary incentives and state subsidies as inducements for the acceptance of community development schemes.

Villages Astir is unique in its study of attitudinal and behavioral responses to agents of change as these interact with persistent traditions.

Also included is an analysis of the effects of modern community and urban experience on political participation.