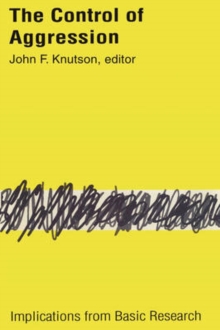 Although aggressive behavior and its consequences has been a topic of concern for centuries, it is only within the recent past that serious attempts to understand aggression have been made.

Within the last decade concern has expanded at a very high rate, perhaps impelled by an increase in aggression or the implication of an increase by frequent media reports of aggressive behavior.

This apparent increased concern is matched by an increase in research. This volume brings together for the first time the diverse research strategies that reflect current major approaches to understanding the psychology of aggression.

It deals with both basic laboratory research and the implications of such research for clinical work.

Theses analyses are significantly amplified by a moment-by-moment sequential analysis of the behavior of aggressive children, and by an examination of the role of semantic conditioning in the ontogeny of human aggressive repertoires.

The final chapter (written by the editor) examines recurring problems in aggression research in general and considers points of consensus among the contributors to the volume. Control of Aggression will interest clinical psychologists and the full spectrum of other scientists engaged in research on the subject, including behavioral pharmacologists and biologists, geneticists, physiological and social psychologists, and sociologists.