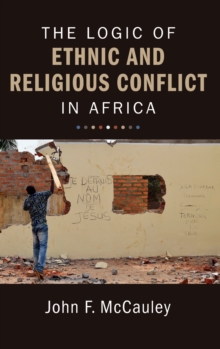 The Logic of Ethnic and Religious Conflict in Africa Hardback

This book explains why conflicts in Africa are sometimes ethnic and sometimes religious, and why a conflict might change from ethnic to religious even as the opponents remain fixed.

Conflicts in the region are often viewed as either 'tribal' or 'Muslim-Christian', seemingly rooted in deep-seated ethnic or religious hatreds.

Yet, as this book explains, those labels emerge as a function of political mobilization.

It argues that ethnicity and religion inspire distinct passions among individuals, and that political leaders exploit those passions to achieve their own strategic goals when the institutions of the state break down.

To support this argument, the book relies on a novel experiment conducted in Cote d'Ivoire and Ghana to demonstrate that individual preferences change in ethnic and religious contexts.

It then uses case illustrations from Cote d'Ivoire, Nigeria, and Sudan to highlight the strategic choices of leaders that ultimately shape the frames of conflict.