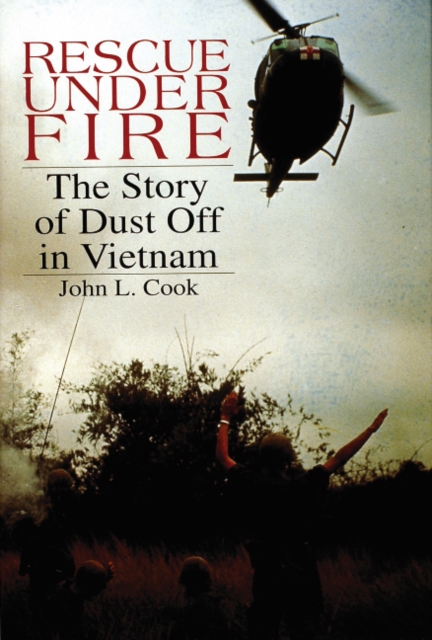 Rescue Under Fire: The Story of DUST OFF in Vietnam Hardback

It is almost impossible to capture, in a single word, the enormous impact Dustoff had on the Vietnam War.

However, John Cook has done it in a most compelling, sensititve manner.

Here, for the first time, is one of the most incredible stories produced by Vietnam.

This is the story of the men who risked everything to fly their evacuation helicopters into the teeth of the most intense fighting the war produced to achieve a single goal a evacuate the wounded. And that is what they did, day after day, night after night, under every condition imaginable.

They flew through enemy fire, cloud banks, monsoons, fog, and darkness to reach the wounded.

When it was all over, the men of Dustoff had performed an unbelievable feat a hundreds of thousands of wounded had been snatched from the battlefield.

After exhaustive research and countless interviews, John Cook has skillfully woven all the threads of this epic story into a seamless fabric of dedication, sacrifice and courage.

While it reads with the smoothness and consistency of a first-rate novel, there is no fiction here.

The Dustoff crews are real, these events happened and Cook provides the absolutely critical human dimension that makes this story come alive.

John Cook is also the author of The Advisor: The Phoenix Program in Vietnam (available from Schiffer Publishing Ltd.).