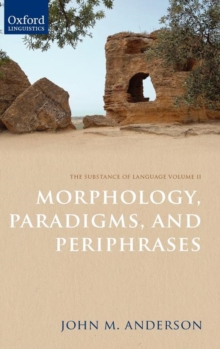 Part of the The Substance of Language Volume II series

The Substance of LanguageVolume I: The Domain of SyntaxVolume II: Morphology Paradigms, and PeriphrasesVolume III: Phonology-Syntax AnalogiesJohn M. AndersonThe three volumes of The Substance of Language collectively overhaul linguistic theory from phonology to semantics and syntax to pragmatics and offer a full account of how the form/function relationship works in language.

Morphology , Paradigms, and Periphrases is concerned with the role of the lexicon, in particular its inflectional morphology, in mediating between the substantively different categories of syntax and phonology.

In the first part of the book Professor Anderson looks at the central role of the paradigm in reconciling the demands of syntactic categorization with the available means of expression.

He examines the expressive role of inflection, illustrating his argument with Old Englishverb morphology.

In the second part of the book the author pursues the notion of grammatical periphrasis.

He starts out from its role as a solver of the problem of defective or incomplete paradigms and then compares it with other analytic expressions.

He concludes with a discussion of why studies of grammaticalperiphrasis have focused on verbal constructions.

He looks at the mechanism by which grammatical periphrases compensate for gaps in the finite verb paradigm and what this reveals about the substantive differences between verbs and nouns. The many detailed proposals of John Anderson's fine trilogy are derived from an over-arching conception of the nature of linguistic knowledge that is in turn based on the grounding of syntax in semantics and the grounding of phonology in phonetics, both convincingly subsumed under the notion of cognitive salience.