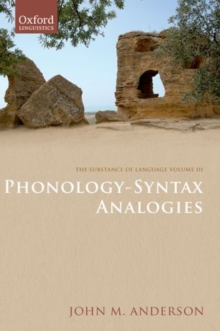 Part of the The Substance of Language Volume III series

The Substance of LanguageVolume I: The Domain of SyntaxVolume II: Morphology, Paradigms, and PeriphrasesVolume III: Phonology-Syntax AnalogiesJohn M. AndersonThe three volumes of The Substance of Language collectively overhaul linguistic theory from phonology to semantics and syntax to pragmatics and offer a full account of how the form/function relationship works in language.

Phonology-Syntax Analogies looks at the substantive and structural analogies between phonology and syntax and the factors that cause such analogies to break down.

It considers the degree to which analogies between syntax and phonology result from their both being representational subsystems within the overall system of language.

At the same time it examines how far semantic and phonetic properties limit such analogies.

The book presents a powerful argument against the notion of anungrounded autonomous syntax, which it sustains and supports by detailed grammatical analyses and a powerfully coherent conceptual understanding of the nature of languageThe many detailed proposals of John Anderson's fine trilogy are derived from an over-arching conception of the nature of linguistic knowledge that is in turn based on the grounding of syntax in semantics and the grounding of phonology in phonetics, both convincingly subsumed under the notion of cognitive salience.