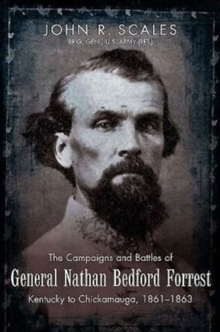 The Campaigns and Battles of General Nathan Bedford Forrest : Kentucky to Chickamauga, 1861-1863 Hardback

Nathan Bedford Forrest was one of the most intriguing characters to emerge during the Civil War.

There are no shortage of books and articles on the man and his generalship, with topics ranging from hero worship based on his extraordinary battlefield successes to condemnation based on his association with Fort Pillow and later, the Ku Klux Klan. Author John R. Scales, a retired special forces brigadier general, breaks new groundwith The Campaigns and Battles of General Nathan Bedford Forrest: Kentucky to Chickamauga, 1861-1863.This first installment of a two-book work carefully examines, in an entirely unique fashion, the campaigns and battles in which Forrest participated during the first two years of the war-the period during which he learned the role he was born to play. Each chapter, which covers a specific raid or campaign, begins by describing the operational picture in which Forrest operated to help the reader understand the larger environment within which the movements were made and the battles fought.

This is followed by a narrative of the decisions and actions Forrest and his opponents made.

Firsthand sources, including heavy use of official documents and reports from the Official Records, coupled with nearly 60 detailed maps, allow the reader to understand the background, engagements, and movements that involved Forrest and his command. The Campaigns and Battles of General Nathan Bedford Forrest is also a guide to Forrest's campaigns.

Each chapter narrative is followed by detailed driving directions for both the battlefields and the routes of the cavalryman's famous raids, making it easy for readers to follow the general's path during the first two years of the war.

A detailed review of each raid or campaign concludes each chapter, which allows General Scales to use his own extensive military background to explain how and why Forrest grew in ability and potential as a result of his experience-or didn't. For the first time, readers will finally fully understand where, how, and why each of Forrest's engagements took place, how his actions affected the war in the Western Theater.

The late award winning author Albert Castel asked two major questions about Nathan Bedford Forrest:"Exactly what impact did Forrest's dazzling raids and victories have upon the overall course of the war?" and "Had Forrest been given a higher command and/or greater opportunities, what would have been the potential outcome as regards the fate of the Confederacy?" This book will make it easier to answer both.