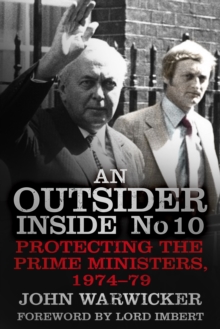 An Outsider Inside No 10 : Protecting the Prime Ministers, 1974-79 Paperback / softback

Former Special Branch officer John Warwicker gives the inside story of the six years he spent in charge of security at 10 Downing Street, tracking one of the most turbulent periods in modern British politics.

From 1974-79, when the threat of the Cold War and the IRA was ever present, the `targets' who Warwicker protected daily, both at home and overseas, were Prime Ministers Wilson, Callaghan and Thatcher.

More than thirty years on since Warwicker left his post, his insightful memoir, based not only on personal memories and experience, but often also from contemporaneous notes, includes a fascinating and frank insight into the day-to-day operations at Downing Street and Chequers and the eccentric cast of characters within.

Despite the constant threat of terrorism that was prevalent at the time, there is a touch of Yes, Prime Minister that runs through the narrative, which adds a surprisingly amusing element to this revelatory book.