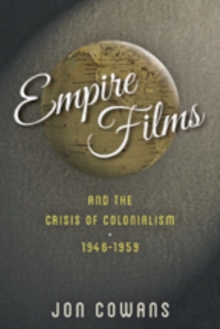 Empire Films and the Crisis of Colonialism, 1946-1959 Hardback

Using popular cinema from the United States, Britain, and France, Empire Films and the Crisis of Colonialism, 1946- 1959, examines postwar Western attitudes toward colonialism and race relations.

Historians have written much about the high politics of decolonization but little about what ordinary citizens thought about losing their empires.

Popular cinema provided the main source of images of the colonies, and, according to Jon Cowans in this far-reaching book, films depicting the excesses of empire helped Westerners come to terms with decolonization and even promoted the dismantling of colonialism around the globe.

Combining new archival research on the films' production with sharp analysis of their imagery and political messages, the book also assesses their reception through box-office figures and newspaper reviews.

It examines both high-profile and lesser-known films on overseas colonialism, including The King and I, Bhowani Junction, and Island in the Sun, and tackles treatments of miscegenation and "internal colonialism" that appeared in Westerns and American films like Pinky and Giant.

The first truly transnational history of cinema's role in decolonization, this powerful book weaves a unified historical narrative out of the experiences of three colonial powers in diverse geographic settings.