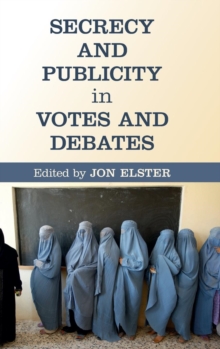 Secrecy and Publicity in Votes and Debates Hardback

In the spirit of Jeremy Bentham's Political Tactics, this volume offers the first comprehensive discussion of the effects of secrecy and publicity on debates and votes in committees and assemblies.

The contributors - sociologists, political scientists, historians, legal scholars - consider the micro-technology of voting (the devil is in the detail), the historical relations between the secret ballot and universal suffrage, the use and abolition of secret voting in parliamentary decisions, and the sometimes perverse effects of the drive for greater openness and transparency in public affairs.

The authors also discuss the normative questions of secret versus public voting in national elections and of optimal mixes of secrecy and publicity, as well as the opportunities for strategic behavior created by different voting systems.