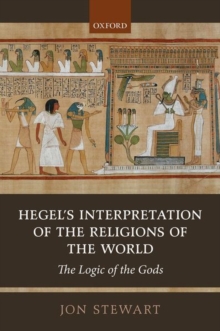 Hegel's Interpretation of the Religions of the World : The Logic of the Gods Hardback

In his Lectures on the Philosophy of Religion, Hegel treats the religions of the world under the rubric "the determinate religion." This is a part of his corpus that has traditionally been neglected since scholars have struggled to understand what philosophical work it is supposed to do.

In Hegel's Interpretation of the Religions of the World, Jon Stewart argues that Hegel's rich analyses of Buddhism, Hinduism, Zoroastrianism, Judaism,Egyptian and Greek polytheism, and the Roman religion are not simply irrelevant historical material, as is often thought.

Instead, they play a central role in Hegel's argument for what he regards as the truth of Christianity.

Hegel believes that the different conceptions of the gods in the world religions are reflections ofindividual peoples at specific periods in history.

These conceptions might at first glance appear random and chaotic, but there is, Hegel claims, a discernible logic in them.

Simultaneously, a theory of mythology, history, and philosophical anthropology, Hegel's account of the world religions goes far beyond the field of philosophy of religion.

The controversial issues surrounding his treatment of the non-European religions are still very much with us today and make his account of religion anissue of continued topicality in the academic landscape of the twenty-first century.