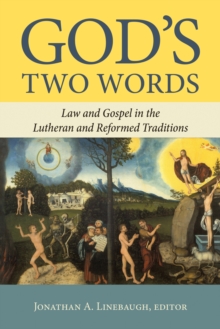 Edited by Jonathan A. Linebaugh

The distinction between God's law and God's gospel lies at the core of the Lutheran and Reformed traditions-and has long been a point of controversy between them.

God's Two Words offers new contributions from ten key Lutheran and Reformed scholars on the theological significance of the law-gospel distinction. Following introductory chapters that define the concepts of law and gospel from each tradition, contributors explore how the distinction between law and gospel plays out in theology, preaching, the reading of Scripture, and pastoral care.

As it traces both the common ground and the areas of disagreement between the two traditions, this book amplifies and clarifies an important conversation that has been ongoing since the sixteenth century. CONTRIBUTORS: Michael Allen, Charles Arand, Erik H.