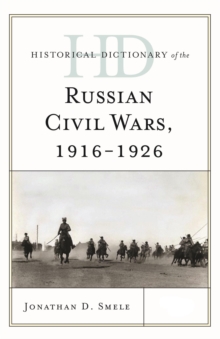 Part of the Historical Dictionaries of War, Revolution, and Civil Unrest series

This book is a detailed reference of the twentieth century struggles that were waged across and beyond the decaying Russian Empire at the end of the First World War, as tsarism and democratic alternatives to it collapsed and the world's first Communist state, the Union of Soviet Socialist Republics, was born.

At the same time, it is a necessary corrective to studies that have viewed events of the time as a unitary "Russian Civil War" that sprang from the Russian Revolution of 1917.

Instead, it contributes to the ongoing process of integrating the civil wars into a "continuum of crises" that wracked the Russian Empire and its would-be successor states across a prolonged period. The Historical Dictionary of the Russian Civil Wars, 1916-1926 covers the history of this period through a chronology, an introductory essay, appendixes, and an extensive bibliography.

The dictionary section has almost 2,000 cross-referenced entries on individuals, political and governmental institutions and political parties, and military formations and concepts, as well as religion, art, film, propaganda, uniforms, and weaponry.

This book is an excellent access point for students, researchers, and anyone wanting to know more about the Russian Civil War.