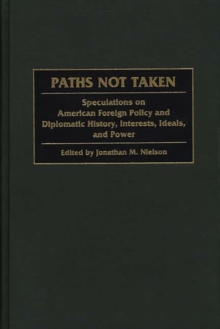 In America's foreign affairs there has been a delicate balance between often conflicting imperatives of interests, ideals, and power.

How these imperatives have intersected to shape the constellation of American foreign policy decisions throughout the nation's history and, indeed, how they have served to advance or subvert attainment of America's regional, hemispheric and global ambitions, is the subject of this study.

This collection of essays explores seminal decisions in American foreign policy and diplomatic history, from the early National period to the Vietnam War, each of which proved to be a turning point, and then asks readers to consider alternative futures based upon different courses of action.

Nielson underscores how history could, and perhaps should, have been different. U.S. foreign policy has in large measure been contingent upon decisions made by individuals in positions of power.

Their personalities, characters, and assumptions about duty and America's role in the world have uniquely shaped policy choices and, thus, the course of foreign affairs, for better or worse.

This book hopes to show that history is ever fluid, unpredictable, and problematic.

It will complement traditional texts as a what if counterpoint which will stimulate interest in and speculation about leadership roles, national interest, and decision making in foreign policy.