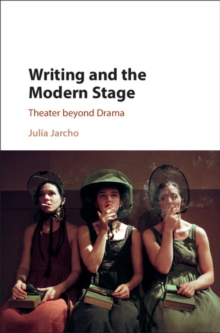 Writing and the Modern Stage : Theater beyond Drama Hardback

It is time to change the way we talk about writing in theater.

This book offers a new argument that reimagines modern theater's critical power and places innovative writing at the heart of the experimental stage.

While performance studies, German Theaterwissenschaft, and even text-based drama studies have commonly envisioned theatrical performance as something that must operate beyond the limits of the textual imagination, this book shows how a series of writers have actively shaped new conceptions of theater's radical potential.

Engaging with a range of theorists, including Theodor Adorno, Jarcho reveals a modern tradition of 'negative theatrics,' whose artists undermine the here and now of performance in order to challenge the value and the power of the existing world.