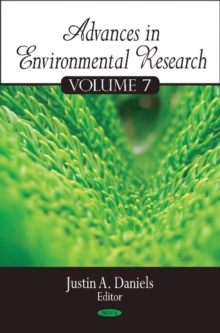 Edited by Justin A Daniels

The environment consists of the surroundings in which an organism operates including air, water, land, natural resources, flora, fauna, humans and their interrelation.

It is this environment which is both so valuable, on the one hand, and so endangered on the other.

Effects stemming from the choices made by the human population in regards to environmental health are by and large ruining the environment both for themselves and for other organisms.

This series covers leading-edge research in a cross-section of fields centring on the environment including current research data on earthquake and tsunami warnings, paddy fields and soils, deforestation and environmental security.