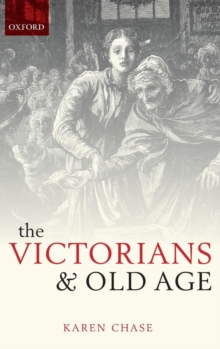 The Victorians and Old Age Hardback

by Karen (Professor of English, University of Virginia) Chase

Karen Chase examines old age as it was constructed in Victorian social and literary cultures.

Beginning with the vexed relation between elderly people whose numbers and needs taxed the state which sought to identify, classify, and provide for them, she analyzes illuminating moments in narrative form, social policy, or cultural attitudes.

The book considers the centrality of institutions and of the generational divide; it traces the power and powerlessness of agethrough a range of characters and individuals as distinct from one another as Dickens's inebriated nurse, Sairey Gamp, to the sober Queen Victoria; and it studies specific narrative forms for expressing heightened emotions attached to aging and the complexities of representing age in pictorial andstatistical 'portraits'.

Chapters are organized around major literary works set alongside episodes and artefacts, diaries and memoirs, images and inscriptions, that produced (and now illuminate) the construction of old age through Victoria's long reign.

The Victorians and Old Age shows that if old age became for the Victorians such a conspicuous public topic and problem, it also became an intensely private preoccupation.

The social formation of old age created terms, images, and narratives that lone individuals used to fashion the stories of their lives. The book is intent to respect the specificity of aging: not only the wide diversities of circumstance (rich and poor, urban and rural, watched and forgotten, powerful anddispossessed) but also the distinct acts of representation by novelists, painters, journalists, sociologists, and diary-keepers.