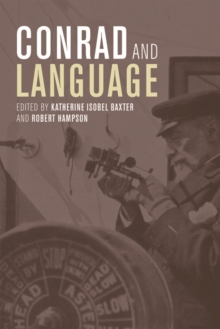 Opens up the rich topic of Joseph Conrad's complex relationship with languageJoseph Conrad was, famously, trilingual in Polish, French and English, and was also familiar with German, Russian, Dutch and Malay.

He was also a consummate stylist, using words with the precision of a poet in his fiction. The essays in this collection examine his engagement with specific lexical sets and terminology - maritime language, the language of terror, and abstract language; issues of linguistic communication - speech, hearing, and writing; and his relationship to specific languages - his deployment of foreign languages, his decision to write in English, and his reception through translation.

The collection closes with an Afterword by renowned Conrad scholar, Laurence Davies. Key FeaturesThe first academic and critical study wholly devoted to the topic of Conrad and language, and the first to address that topic from a diversity of critical approachesSpeaks to a range of current trends in literary criticism including transnationalism, lateness, translation studies, terrorism and disabilities studiesComprises newly commissioned essays by leading and emerging Conrad scholars from around the world, employing a variety of approaches including philosophy, psychoanalytical theory, biographical theory, as well as textually driven readings