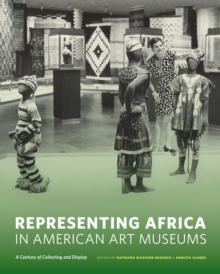 In recent years, the critical study of museums has emerged as a major focus of scholarly inquiry across various disciplines, bringing into greater focus the effect that museum practice has on the formation of meaning and the public perception of objects.

Representing Africa in American Art Museums is the first comprehensive book to focus on the history of African art in American art museums.

Chronicling more than a century of building and presenting collections of African art in thirteen American art museums, from the late 1800s to the present, the book considers the art museum as a lens for understanding the shifting visions of African art that are manifested in institutional practices of collecting and display in the United States. Thirteen essays present the institutional biographies of African art collections in a selection of American art museums: the Cincinnati Museum of Art, the Hampton University Museum, the Brooklyn Museum, the Barnes Foundation, the Cleveland Museum of Art, the Museum of Primitive Art, the Art Institute of Chicago, the Indiana University Art Museum, the Fowler Museum at UCLA, the University of Iowa Art Museum, the Seattle Art Museum, the Menil Collection, and the National Museum of African Art. Kathleen Bickford Berzock and Christa Clarke offer a review of the history of collecting and displaying African art in American museums and identify important issues that are raised by the essays: defining aesthetic criteria for African art and for its display; breaking free from the monolithic rubric of "primitive art"; broadening perceptions of what constitutes African art; and formulating a place for context and culture in understanding and presenting African art. Representing Africa in American Art Museums concludes with an afterword that anticipates the direction for the collecting and display of African art in the twenty-first century, including the ethics and legalities of collecting; the deconstruction of a singular and authoritative museum voice in interpreting works of art; the interests and engagement of local African American and African communities that have a stake in how collections are represented; and how, if, and where to include contemporary art from Africa in museum collections.