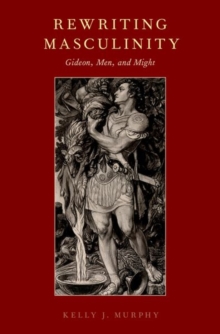 How did so many conflicting portraits of Gideon the man become inscribed in our biblical text?

What might these different portraits tell us about the authors and editors of Gideon's story, especially in howthey expected men to act? And how have interpreters rewritten the story of Gideon in order to create their own expectations for how to act-or not-as a man?

By interweaving redaction criticism, reception history, and masculinity studies, Rewriting Masculinity explores how Gideon went from being understood as a mighty warrior to a weakling, from a successful leader to a man who led Israel astray.

Kelly J. Murphy first considers the ways that older traditions about Gideon were rewritten at key moments in ancient Israel's history, sometimes so that the story of Gideon might better align with new ideas about what it meant to be a man.

At othertimes, she shows, the story of Gideon was used to explain why older standards of masculinity no longer worked in new contexts.

From here, Murphy traces how later generations of interpreters, from the ancient to the contemporary, continually rewrote Gideon in light of their own models for men, might, andmasculinity.

Rewriting Masculinity is an in-depth case study of how a biblical text was continuously updated.

Emphasizing the importance of reading biblical stories and expansions alongside the later reception history of the narrative, Murphy shows that the story of Gideon the mighty warrior is, in many ways, the story of masculinity in miniature: an ever-changing, always-in-crisis, and constantly-transforming ideal.