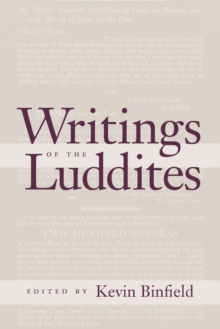 Writings of the Luddites Paperback / softback

Named for their probably mythical leader, Ned Ludd, the Luddites were a group of social agitators in nineteenth-century Britain who tried to prevent the mechanization of cloth factories, which they blamed for increased unemployment, poverty, and hunger in industrial centers.

Though famous for their often violent protests, the Luddites also engaged in literary resistance in the form of poems, proclamations, petitions, songs, and letters.

In Writings of the Luddites, Kevin Binfield collects complete texts written by Luddites or Luddite sympathizers between 1811 and 1816, adds detailed notes, and organizes the documents by the three primary regions of origin: the Midlands, Northwestern England, and Yorkshire.

Binfield's extensive introduction provides a historical overview of the Luddites and their activities, explores their rhetorical strategies, and illuminates their literary context.

Written for the most part from a collective point of view, the texts themselves range from judicious to bloodthirsty in tone and reveal a fascination both with legal forms of address and with the more personal forms of Romantic literature, as well as with the recent political revolutions in France and America.